Telco Cuba launches MVNO after FCC nod to operate in US – Cuba
US-based Telco Cuba has launched a mobile virtual network (MVNO) in partnership with Next Mobility, following its approval as a service provider by the US Federal Communications Commission (FCC) last week, the company announced in a press release.
The MVNO will work on 4G LTE and 3G, and services are currently available in the US, and will work in other countries via roaming. It is expected to be operational within two months.
Telco Cuba, created from the operations of technology provider Amgentech, offers telecommunication services, including VoIP, calling cards and messaging, between the US and Cuba. It focuses exclusively on the Hispanic market in both countries.
FCC granted International Section 214 license to Telco Cuba on July 29, enabling the operator to bring telecom services from the US to anywhere in the world.
Telco Cuba’s next step will be to set up operatios on the island in order to finalize details on launching roaming, VoIP and other technology services in the country.

El Salvador must alter legislation for digital TV transition – OAS official – El Salvador
In order to carry out an effective transition to digital TV, El Salvador requires an appropriate legal framework, according to Edison Lanza, special rapporteur for freedom of expression from the Organization of American States (OAS).
Lanza made his comments at the international forum of radio and television digitization. “Digitization of the TV signal poses challenges that are not always defined in our laws,” he was quoted as saying by La Prensa Gráfica.
The analog switch-off is scheduled for 2018 in several countries in the region, including El Salvador, though the country is still lacking a timeline on the process. Advocacy group 4G Americas named El Salvador as one of the countries in Latin America in need of a defined digital TV transition plan, together with Guatemala and Nicaragua.
Consultant Esteban Greco, who drafted a report on digital TV for the domestic antitrust body, said that El Salvador is seriously lagging behind in international trends. “Most countries are already in transition, some are still carrying out tests,” he said.
The transition to digital TV was brought to a halt in El Salvador during the government of Mauricio Funes (2009-2014), when the decision to adopt the US model was overturned.
Thirteen countries in the region have gone with the Japanese standard ISDB-T, including Brazil, whereas Mexico and the Dominican Republic, which plan to carry out the analog switch off this year, have gone with the US’s ATSC.

Mozilla CEO blasts Windows 10 in open letter to Microsoft – Regional
Not everything is warm and fuzzy when it comes to Windows 10. Chris Beard, CEO of the non-profit, open-internet advocate Mozilla foundation, has lambasted Windows 10’s “lack of freedom” in a public letter to Microsoft CEO, Satya Nadella.
Beard was particularly critical of Microsoft’s embedding of the new Microsoft Edge browser in its latest Windows version, which seeks to gradually replace the aging Internet Explorer. Mozilla develops rival browser Firefox.
Edge is the default browser on Windows 10, and while the option to customize a different browser remains, Mozilla believes that this process has purposely been made substantially more difficult by Microsoft.
“The update experience appears to have been designed to throw away the choice your customers have made about the internet experience they want, and replace it with the internet experience Microsoft wants them to have,” Beard wrote to Nadella.
To Mozilla, Windows 10 “strips users of their choice by effectively overriding existing user preferences for the web browser and other apps.”
Beard claims Windows 10 takes more than twice the number of clicks, more scrolling and “some technical sophistication” for users to be able to restore their preferences from previous Windows versions.
He adds, though, that it is still possible to change Windows 10’s APIs to make this process more intuitive.
The executive said that the Mozilla team reached out to Microsoft to discuss the matter, but had no success.
“We strongly urge you to reconsider your business tactic here and again respect people’s right to choice and control of their online experience by making it easier, more obvious and intuitive for people to maintain the choices they have already made through the upgrade experience.”
Microsoft did not immediately comment on the issue.
FIREFOX OS IN LATIN AMERICA
In recent times, Mozilla has moved away from a browser-only strategy with the creation of a Firefox open-source, HTML5-based OS, targeting mainly mobile phones. The bet was to offer an alternative to iOS and Android.
While Firefox OS is yet to become gain widespread acceptance, it has had substantial impetus in Latin America, principally due to Telefónica, one of the major global backers of the standard.
Firefox OS is currently available in Telefónica’s markets in Brazil, Chile, Colombia, Costa Rica, El Salvador, Guatemala, Mexico, Nicaragua, Panama, Uruguay and Venezuela, and is due for launch in Ecuador this year.
In March, Mozilla announced a new version of Firefox OS, to be available in 2016, by which time the operating system will be present in 40 markets through 17 smartphone models.

Alcatel-Lucent pays US$10mn to Costa Rica’s ICE over bribery claims – Costa Rica
French telecoms equipment supplier Alcatel-Lucent has paid US$10mn to Costa Rican state telco ICE as compensation for a bribery scandal originating in 2004.
The companies reached an out-of-court settlement after ICE gave approval in June to go down the non-judicial route.
Alcatel had previously proposed compensation payments of US$3mn in 2008, and US$5mn in 2012, which were rejected by ICE.
The French company, formerly called Alcatel, was accused of bribing officials, including former Costa Rican President Miguel Ángel Rodríguez (1998-2002), to win a US$149mn contract to install 400,000 GSM lines.
ICE filed a lawsuit in 2010 in a US court for damages and civil racketeering. Earlier that year, Alcatel-Lucent reached an agreement with the US Justice Department and the US securities regulator (SEC) to pay damages of over US$137mn in order to avoid criminal prosecution.
Miguel Ángel Rodríguez was eventually indicted on charges of extortion and corruption in 2010, five years after his initial arrest.
Rodríguez resigned from his post as secretary general of the Organization of American States (OAS) when the corruption charges were filed in 2004. According to the public prosecutor’s office, Rodríguez received more than US$600,000 in payments from Alcatel in exchange for helping the company win the contract.
Alcatel-Lucent is set to be acquired by Nokia after the transaction was approved by the European Commission. The French company has spun off its Alcatel Lucent Enterprise unit, which is increasingly separating from its parent company.

Sharing economy apps should be regulated – Asiet – Mexico, Regional
In terms of sharing economy applications, technology has moved faster than regulation in Latin America, but that is no reason for companies involved in this business to elude legislation.
“Innovation should not be an excuse to work around laws that exist for public and personal interest,” said Pablo Bello, secretary general of Ibero-American telecoms operator association Asiet, during the Economic Commission for Latin America and the Caribbean’s (Eclac) Fifth Ministerial Conference on the Information Society and Latin America in the Caribbean, being held in Mexico City.
Bello gave the example of Über and the backlash it has received in several countries.
“If society believes there should be legislation to control the safety and standard of services, it should be respected by all companies, regardless of the platform they use,” Bello said.
Raúl Katz, professor of business strategy for business technology at Columbia University, said that the slow pace of regulation demands flexibility from society to accept services like Über or AirBnB while legislation is brought up to date.
“These services are certain disruptive,” he said, “and legislation is not ready for them.”
Katz added that since governments are less prone to change than technology, citizens need to be open to these introductions with caution. “There is no need to reject these companies on principle,” he said, “but flexibility in the approach is key.”
Pablo Bello agreed that regulation is made obsolete by technological advances, but that should not be a reason for sharing economy companies to elude legislation, he said.
The question of how to regulate the sharing economy has been brought up several times. Mexico City has pioneered legislation for car-sharing apps, which was welcome news to Über.
However, this sparked more protests and attacks from taxi drivers across the country, who see the legitimation of the company as unfair competition since Über drivers have to go through a training process with Über, but do not have to register with the government. 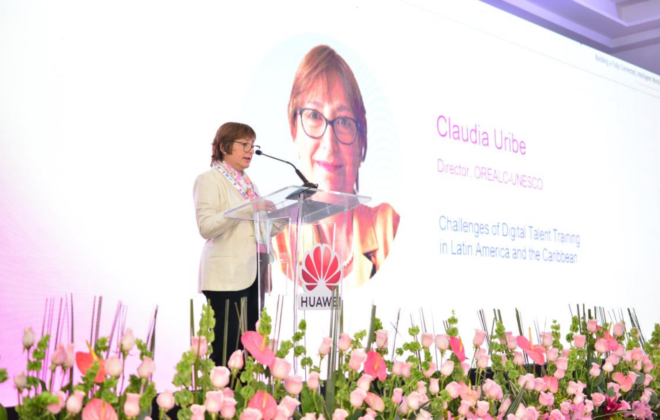 Latin America And The Caribbean Will Need Additional 2.5 Million ICT Professionals In Next 5 Years, Says Expert

Industry News, media, News, Telecom News
has been added to the cart. View Cart
0
0
Your Cart
Your cart is emptyReturn to Shop
Continue Shopping