Puerto Rico will invest US$17mn in installing a high-speed fiber optic internet network in capital San Juan, governor Alejandro García Padilla said during a technology summit.
The network is due to be operating by end-2015 and is the foundation phase of an initiative – Gigabit Island – to install fiber optic infrastructure across the country to help stimulate economic development.
Puerto Rico’s water authority AAA will this year begin running cables through its sewerage pipeline network to homes and businesses.
In the first phase the Old San Juan, Miramar, Isla Verde and Santurce metropolitan areas will be interconnected, governor Alejandro García Padilla said during a technology summit.
The project will provide broadband speeds of up to 100Gbps, García added.
GSMA, IDB create LatAm broadband policy training center – Regional

London-based GSM Association (GSMA) and the Inter-American Development Bank (IDB) have opened a Latin American broadband training center in Managua, Nicaragua.
The facility, officially launched on Monday, provides education on the management and formulation of public policy in the areas of IT and communication.
The main purpose of the center is to train, via intensive courses, government officials from Spanish-speaking countries in Latin America.
As of March 2014, Latin America had 234mn mobile broadband connections, according to a GSMA release.
The number of connections is expected to increase 30% over the next five years.
Guatemala court suspends controversial telecoms law – Guatemala

Guatemala’s constitutional court has suspended parts of a controversial telecoms law passed in April that criminalizes certain activities.
Justices ruled that three articles were illegal, including article 11, which would have imposed six to eight years of prison time for people or companies interfering with telecom infrastructure installation or repair, local daily La Prensa Libre reported.
The supreme court has received six injunctions against the law that was introduced in congress on April 8, when it was debated and approved almost unanimously in just a few hours.
The 17-article law that took effect that same month is meant to make it easier for the country’s largest telcos to apply for permits and install infrastructure.
But critics claim the law violates municipal autonomy and private property rights by allowing telephony operators to get infrastructure installation approval directly from telecom regulator Sit, and requiring that local authorities help with the installation.
Justices suspended this provision, Article 12, which would have charged public officials for failing to aid telecom providers in the installation, use or repair of infrastructure.
They also nixed another one that expands the rights of telecom providers (Tigo, Claro and Movistar) with more than 6,000km of fiber optic lines in place or with 100,000 or more access lines.
Sit will now be able to make public statements on the court’s decision and arguments will be heard from the parties that filed the complaints, including several indigenous groups, municipal associations and the Guatemala City government.
Colombia’s EPM to expand into Costa Rica – Colombia, Costa Rica

Colombian multi-utility EPM will expand into Costa Rica, a company release said.
The new unit is part of an international strategy for the company, which also has energy subsidiaries in Guatemala, El Salvador and Panama.
Describing Costa Rica as one of the safest and most stable countries in Central America, EPM said it planned to prioritize social responsibility in its operations there.
The Medellín-based company provides electric power, natural gas, water and telecommunications services.
Austria regulator agrees América Móvil, Telekom Austria pact – Regional

Austrian federal competition authority BWB has approved a syndicate deal between América Móvil and state holding OIAG to pool their stakes in Telekom Austria, local press agency APA reported.
The deal gives the two companies an overall majority in the Austrian telco and led to a takeover bid by América Móvil which runs until July 10.
The competition regulator did not refer to the “acquisition of sole control” of Telekom Austria by América Móvil.
However, BWB said that while antitrust concerns did not arise as a result of the syndicate agreement, monitoring of the telecom sector would continue due to concerns over high levels of concentration.
Austria’s telecom regulator RTR is expected to make a decision on sole control of Telekom Austria by América Móvil this month.
The Mexican operator’s 1.4bn euros (US$1.9bn) takeover bid would leave OIAG with a 25% stake in Telekom Austria.
The syndicate deal is a major step for América Móvil, which has a strong presence in most Latin American countries, and in recent years has set its sights on expanding in Europe.
The company turned its attention to Telekom Austria after its initial attempt to acquire Dutch operator KPN fell through last year. 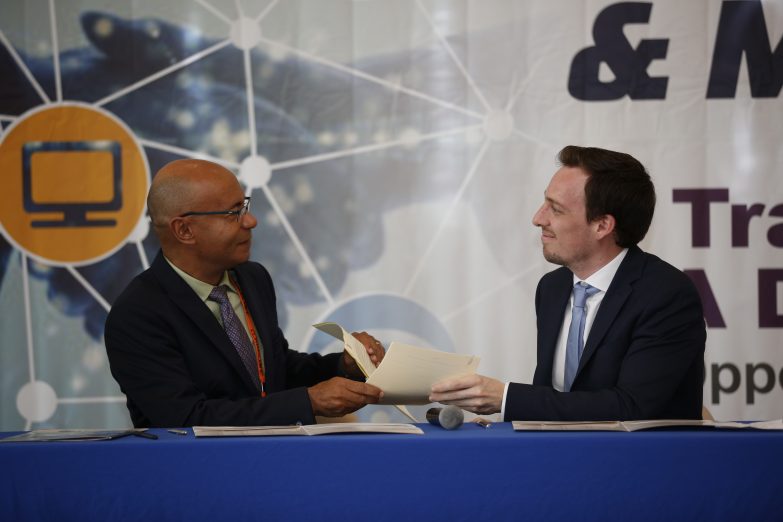 CANTO and GSMA Sign MoU at 35th AGM in Guyana

5G Is Not Related to the Spread of Coronavirus

COVID19, Press Releases
has been added to the cart. View Cart
0
0
Your Cart
Your cart is emptyReturn to Shop
Continue Shopping