Avaya to emerge from Chapter 11 this year – Regional

IT security needs to be adaptive and continuous, says Gartner – Brazil, Regional

Liberty Global posted a 52.7% increase in revenues in its Latin American operations (LiLAC) in 2Q17 to US$921mn driven primarily by the operations of Cable & Wireless Communications (CWC), acquired last year.

Liberty’s CWC operations, that are concentrated in the Caribbean and Central America, grew 1% overall and 3% in the Caribbean, including 15% growth in Jamaica with most growth coming from mobile and managed services.

Revenue from wholesale connectivity across sub-sea and terrestrial networks and B2B rose 13%.

In Chile, Liberty’s VTR operation saw 8% growth in the quarter, on higher ARPU from cable services and increased revenue from a growing mobile base.

Puerto Rico saw revenue growth of 1%, as subscriber losses were offset by growth in the B2B business.

Four companies presented bids for the submarine cable project that will provide fiber optic connectivity for the deep south of Chile.

Telecoms watchdog Conatel launched a tender for the 700MHz band.

The draft bidding rules are available on its website for public consultation. Comments can be sent to licitacion700m@conatel.gov.py until August 16.

The 700MHz tender contemplates a maximum of 40MHz per operator. The minimum bidding price is US$13mn.

In June last year, Oi filed for what is considered Brazil’s biggest-ever bankruptcy protection and the telco is undergoing complex negotiations with creditors and bondholders over the terms for the payment of debts and related liabilities.

Anatel head Juarez Quadros and other Anatel representatives discussed whether Oi will be able to implement a proposed plan to raise up to US$2.5bn in new capital in order to emerge from judicial protection.

The Vive Digital social inclusion program helped increase the number of mobile broadband connections in the country in the first quarter of this year.

The country missed its self-imposed deadline of end of July for liberalizing the fixed-line sector thus thwarting plans to introduce new competitors.

GTT, owned by US-based ATN International, has held sway in fixed line, international voice and data markets since 1990 – and had its 20-year license automatically renewed in 2010.

Mobile operators Orange and Claro have rejected a congressional bill that sets out to eliminate roaming between the US and the Dominican Republic.

In a letter directed to telecom regulator Indotel’s head José Rafael Vargas, Orange said that roaming prices are dictated by international transport costs and termination rates and should not be arbitrarily interfered with by local authorities.

Communications and transport ministry SCT is prepared to renegotiate the North American Free Trade Agreement (Nafta) according to best practices in telecommunications.

During a meeting of Inter-American communications commission Citel, deputy communications minister Edgar Olvera said Mexico will identify common ground with the US and Canada and discuss their differences.

Sales of iPhones in Argentina have been underwhelming since the government lifted import restrictions on April 7, according to consultancy Carrier y Asociados.

During the first half of the year, only 12,000 iPhones entered the country through official customs, representing a mere 0.3% of the total smartphone market.

Apple stopped selling the iconic smartphone in the South American country in 2011, when the government imposed import restrictions due to the company’s refusal to relocate the assembly of its phones to the province of Tierra del Fuego, as other phone brands were obliged to do.

BNamericas takes a look at the operations of Costa Rica’s state-run telco Instituto Costarricence de Electricidad (ICE) and its competitive position in the country’s mobile market in its latest operator series.

The government unveiled its 2017-22 digital transformation policy to prepare for the so-called fourth industrial revolution, or industry 4.0, and address the challenges of advanced manufacturing.

Avaya to emerge from Chapter 11 this year – Regional

US enterprise communications platform and telecommunications company Avaya aims to exit chapter 11 bankruptcy protection in the US by the end of the year.

The company filed for Chapter 11 in January and in April presented a reorganization plan to the US bankruptcy court for the Southern District of New York, which is responsible for its case.

In a statement issued this Monday, the company said it agreed to an amended plan with holders of over 50% of its first lien debt, who committed to vote in favor of the revised plan terms. More details can be found here.

Avaya said it will continue to work to build consensus and gain the support of other stakeholders to get the approval of the new plan at a court hearing on August 23.

With that, the company believes it can exit Chapter 11 in (northern hemisphere) Fall 2017.

The company also announced the promotion of its Chief Operations Officer (COO) Jim Chirico to CEO, in substitution to Kevin Kennedy. Kennedy is retiring as CEO and member of the board of directors but has agreed to remain as an advisor to the company.

The appointment will be effective October 1 and during the transition period Kennedy and Chirico will work together.

In a statement, Avaya highlighted Kennedy’s role in transitioning the company “as a software and services company”.

At the end of May, Extreme Networks was announced as the winning bidder to take over Avaya’s networking business for approximately US$100mn.

In the second fiscal quarter of 2017, software and services accounted for nearly 79% of its total revenue. Total revenue for the quarter was US$804mn, down by US$71mn compared to the prior quarter and down $100 million year-over-year.

Avaya also announced preliminary results for its third fiscal quarter, ended June 30, 2017. Revenue is expected to be in the range of US$802mn to US$804mn, basically flat sequentially and a down 9% year-over-year.

Final results are expected for August 14.

Uruguay e-government agency Agesic is inviting companies to bid on the supply and installation of network switches for data centers.

The tender is part of a program for the improvement of public services and state-public interaction, according to a notice. Agesic seeks to acquire network infrastructure for its existing and new data centers whilst considering high availability, scalability, and flexibility.

Interested companies must present quotations for the two lots entailed in the tender, which has a reference price of US$366,000. Offers must be presented before August 24.

Terms and requirements are available on the Agesic website www.agesic.gub.uy under tender 1014/2017. Details can also be obtained from licitacionesbid@agesic.gub.uy.

The United Nations Development Programme is launching a tender for the provision of multi-function digital printing services for its Guatemalan operations.

The selected supplier will provide the needed printing equipment and associated products (except for paper and electricity) for one year with the possibility of extending the contract for two additional years.

Sealed offers must be submitted by August 28 at 17:30 hours, Guatemala local time, at the address below.

IT security needs to be adaptive and continuous, says Gartner – Brazil, Regional

Enterprises should have an adaptive mindset regarding IT security to face the challenges of the digital age, analysts of consultancy and research firm Gartner said at a press conference in São Paulo, Brazil.

Gartner is holding its Security & Risk Management Summit 2017 in the Brazilian metropolis.

Their recommendation is that companies should not focus just on blocking and preventive solutions, but rather apply a new approach dubbed CARTA [continuous adaptive risk and trust assessment] across the business, from development and operations (DevOps) to partners.

The idea is that the risk environment is evolving and the threats become harder to be blocked or prevented. Context, they say, is necessary to detect risks, and for that the use of data analytics is key.

According to analyst Felix Gaehtgens, one cannot protect everything and it becomes increasingly difficult to detect anomalies in the pattern of behavior.

“As an example, someone might steal the key card from my hotel room and go trying it in several doors, floor by floor. Even though people may be on any hotel floor as they please, the simple attempt to try the key on different doors should sound an alert,” the analyst said.

‘This same contextual intelligent approach should be applied to security,” he added.

Gartner research director Claudio Neiva stressed the need for Brazil to approve a data protection framework. He says that the country has a trend to mirror Europe regulation, but warned that the rules need to look to the future in order not to be outdated.

Gaehtgens and another Gartner analyst, Augusto Barros, said that in many cases companies, in Brazil and elsewhere, request users’ data that are irrelevant or that they do not need.

Barros cited the use of public Wi-Fi as an example, where some Brazilian cities require user’s taxpayer registry CPF.

To the analysts, in terms of IT security, time is money; in reference to the time taken to detect and respond to threats. They say that the more time it takes, the greater the loss.

Gartner predicts that by 2019, more than 70% of enterprise DevOps initiatives will have incorporated automated security 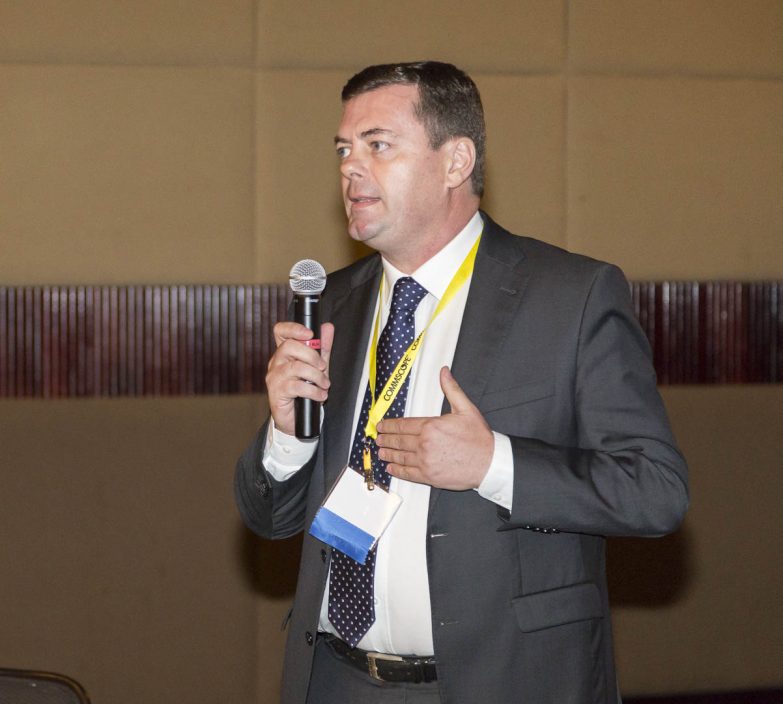 Digicel Here for the People of the Region