CANTO:Telecomunications Power at Play in the Bahamas

Atlantis Paradise Hotel in the Bahamas was the venue for CANTO’s 30th Annual Conference & Trade Exhibition where the organization’s pearl anniversary was celebrated in grand style. The Bahamas, land of sun, sea and sand welcomed over 500 delegates on its shores for an action packed agenda from the 10th -15th of August. Bahamas Telecommunications Company (BTC) co-hosted the event.

Over a four-day period, delegates engaged in discussions, listened to speeches and viewed presentations by the Prime Minister of the Bahamas, the Hon. Perry Christie, 14 Caribbean ICT government ministers, 3 Secretary Generals , and CEOs and directors of several ICT companies.

The popular annual conference and trade exhibition also known as CANTO 2014 is the Caribbean’s premier telecommunications event for industry professionals, academics and regional governments. This year, the theme was “Strategic Alliances for Sustainable Broadband Development”.

Hon. Perry Gladstone Christie in his feature address challenged the regional telecoms/ICT sector to ‘dare to dream’ in making the region a better ICT-enabled environment:

“Dare to dream and provoke us, Policy Makers, on the way forward to reducing the digital divide in our separate countries and in the region as a whole. Dare to dream and provoke policy makers on how we should prepare these small island nations that once depended on the banana and sugar plantations for their survival to evolve to an ICT mecca of assembly lines, data centres, IXPs and become the Caribbean Silicon Valley.”

The LIME-sponsored Ministerial Breakfast Briefing jump started the conference. The event was a closed forum where government ministers and invited guests were privy to a high level overview of the current ICT affairs within the Caribbean. The keynote speaker was Martin Roos, CEO, LIME who gave an overview of LIME’s position in terms of broadband development and infrastructure in the Caribbean. An update on CANTO’s current project “Broadband Infrastructure and Public Awareness in the Caribbean” (BIIPAC) update was given by Ayanna Samuels, International ICT and Development Consultant and Technology Policy Specialist.

The Digicel-sponsored Ministerial Roundtable, prides itself on developing strategic relationships with all stakeholders in the ICT sector and provides a neutral forum each year, for government ministers to share their successes and concerns and seek solutions from participants which include operators, regulators, industry experts and suppliers. The subjects of debate at this year’s forum were over-the-top Operators (OTT) and Voice over IP (VOIP). The ministers in attendance were from Anguilla, Antigua & Barbuda, Dominica, Grenada, Jamaica, Montserrat, St. Lucia, St. Maarten, Tortola (BVI), and Turks & Caicos. The government representatives were from Barbados, Dominican Republic, St. Vincent & The Grenadines and Trinidad & Tobago. The keynotes were delivered by Justin Zhuang of Huawei and Julio Espinoza of Ericsson.

The Ministerial Roundtable was divided into two separate panels. Among the issues discussed were the measures needed to accelerate broadband development, successful strategic broadband alliances in the Caribbean, use of USF for broadband development, the effect of OTTs, bypass and possible solutions. There was not always agreement among the panelists. However, Ministers agreed that more efforts should be put into broadband development, including PPP partnerships and the use of USF. Regarding OTTs, Ministers felt that a unified approach would be the best option, but no concrete solution emerged. Some Ministers felt that governments are losing revenue due to bypass. However, persons in the Caribbean are attracted to VoIP so solutions should bear this in mind.

The Public Private Sector Dialogue on the Single CARICOM ICT Space (PPDSICTS) inaugural meeting was also held on Monday during CANTO 2014. This was the first formal meeting of Caribbean ministers of government, senior officials, private sector entities, operators, regulators and independent consultants all with an interest in the Single ICT Space. The meeting demonstrated that there can be positive engagement of the Public-Private-People-Partnership (PPPP) model for the upliftment of all in the region.

This inaugural PPDSICTS meeting had the following objectives:
• Sharing the proposed elements of the CARICOM Single ICT space with a wide range of ICT stakeholders;
• Getting feedback from the broad range of CANTO Stakeholders;
• Defining short-term next steps
• Adoption of the Nassau Declaration on the Single ICT space as a ‘covenant’ of partnering as public/private sector
The Chair of the panel, Dr. Hamadoun Touré from the ITU, detailed that in March 2014, Caribbean Heads of Government agreed to a list of priorities for ‘fast-tracking’ and increasing strategic use of ICTs. These priorities accordingly guided the discussion of the meeting:
1. A Single CARICOM ICT Space to enhance the environment for investment and production;
2. Bringing technology to the people and transforming them to digital natives and digital entrepreneurs;
3. Cyber Security;
4. Mobilization of resources and commitment of member states to invest in ICT;
5. Developing the CARICOM digital agenda 2025

Various sector leaders  gave contributions to the PPDSICTS dialogue. They were as follows:
Jennifer Britton, CARICOM Deputy Programme Manager for ICT4D; Kenneth Sylvester, CEO, Caribbean Knowledge Learning Network; Dirk Currie, Managing Director of Telesur and Chair of the CANTO Board of Directors; Chris Dehring, Chairman, LIME Jamaica & Head of Government Relations (Caribbean); E J Saunders, General Manager, Digicel Turks & Caicos; and Rhea Yaw Ching, VP Sales & Marketing of Columbus Communications committed on behalf of the operators they represent., to be on board to work to ensure the success of the CARICOM PPDSICTS.
Isaac Solomon, the Director of ECTEL, then gave perspective from the Regulators’ point of view, sharing that further to regulatory consistency efforts which have already taken place across five (5) ECTEL states, there is strong precedent to augur for the success of the PPDSICTS.

A very engaged question & answer session ensued along with the reading by Mr. Leon Williams, CEO of BTC and co-Host of CANTO 2014, of the Nassau Declaration (ND) on the CARICOM SICTS. Hon. James Fletcher, Minister for the Public Service, Sustainable Development, Energy, Science and Technology of St. Lucia asked for more time to assess before moving to adopt the ND and Dr. Touré acquiesced. A short term next step for this initiative is thus for the ND to be adopted.

The Operators/Regulators Roundtable discussion was held on the Tuesday morning. This track addressed the adaption of service providers to the demand for broadband capacity while keeping up with regulatory requirements. The panelist included: Chair, Opal Neil, Columbus Communications; Sebastian M. Cabello, Director, GSMA Latin America; Anil Sadhoeran and Kenneth Muringen of Telesur; Tim Heffernan, LIME; Andrew Gorton, Digicel; Dr. Satnarine Balkaransingh Telecommunication Authority of Trinidad and Tobago; Stephen Bereaux, Director of Policy and Regulation, URCA, Bahamas; Ing. Alejandro Jimenez, INDOTEL, Dominican Republic and Dirk Heave of Telecom Authority of Suriname. Dirk Heave reiterated that a new approach being adopted by the Regulators is that:
“The Regulators regard itself as the authority but not authoritarian thus want to change the regulatory requirements from being restrictive to more facilitating without losing sight of the consumers’ needs”.

CWIC is the brain child of Ms. Regenie Fräser and Ms. Jennifer Britton, Deputy Program Manager, ICT4D, CARICOM. Ms Fräser, who is the first female Secretary General of CANTO, stated that CWIC will be a staple in the CANTO agenda:

“In the coming months, we will more concretely define how we will govern this new aspect of CANTO. We received over 50 suggested programmes from the women at the launch and we will convene a committee in conjunction with the CARICOM Secretariat to decide exactly which commitments we will implement.”

The trade exhibition displayed the spectrum of communications technologies, offering in-depth information on the latest developments in voice, data, image, and multimedia captured in 62 booths. A J Telecom/Bosch emerged winner of the best booth with their impressive design and knowledgeable staff.

The conference, which was co-located with the exhibition, facilitated discourse on key issues from a panel of experts on topics such as:
• Transforming the Mobile Network
• IPv6 Deployment and the IANA Oversight Transition
• Managing the Spectrum Eco-System
• The Future of Telco Marketing: Content, Timing and Channels for Success

The BIIPAC Project successfully staged its first Technical Committee Meeting on August 12, 2014 and its second Steering Committee Meeting on August 13, 2014 during CANTO 2014. The meetings took an audit across all eight (8) beneficiary countries of the status of the project’s only component for which fieldwork has begun, i.e. the Broadband Diagnostic and Infrastructure Maps Component. Key decisions were made which will assist in ensuring all eight (8) countries abide by the same standards and definitions when reporting the needed Component 1 data. Issues of concern were also ventilated. Beneficiary countries in attendance were Jamaica, Belize, Dominican Republic, Suriname, Barbados and Trinidad & Tobago. Operators present were Cable and Wireless, Digicel and Columbus Communications.

The CTC Project of the Year was awarded to St. Vincent & the Grenadines with their project titled: USF Smart Project; which involves an agreement between the government and telecom provider LIME to provide Internet access for 340 households in St Vincent and the Grenadines for a monthly bill of $10. Second place went to the Telesur of Suriname with their project: “Telesur Bringing Internet to the Interior”.

CANTO is known for serious discourse and intense debate on telecommunication topics, plus action on a multitude of projects. However, when the day turns into night, delegates are treated to a cultural melange allowing all to unwind and network in a relaxed atmosphere while enjoying the cultural offerings of the co-host. CANTO 2014 was no different. Each night, the delegates were treated to plethora of great Bahamian cuisine and were entertained by the versatile local bands and entertainment which included performers re-enacting the local “junkanoo”- a street parade with music, dance and costumes.

The Monday night dinner was sponsored by Ericsson. On Tuesday evening, CANTO thanked all its members and sponsors at a special appreciation dinner sponsored by Facey Telecom, Oberthur Technologies and JDSU. The Closing Cocktail Extravaganza was jointly sponsored by BTC and Icemobile.

For more information on CANTO 2014 and detailed reports on the sessions visit https://canto.org/events-conferences/annual-conference-and-trade-exibition; Also check for updates on our Twitter, Facebook and LinkedIn.

End
CANTO is recognized as the leading trade association of the ICT sector for shaping information and communication in the Caribbean. Founded in 1985 as a non-profit association of 8 telephone operating companies, CANTO has now grown to over 141 members in more than 36 countries. A Board of Directors appointed by the membership directs policy of the Association. This strategy is executed by the staff of a permanent Secretariat based in Trinidad and Tobago. 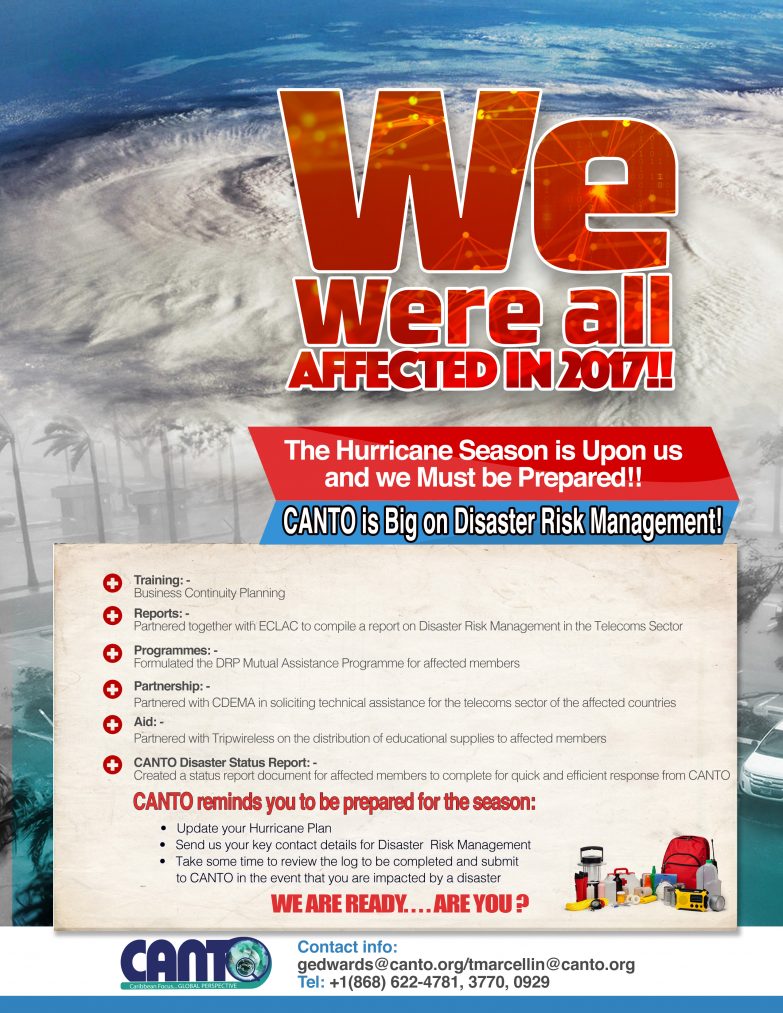